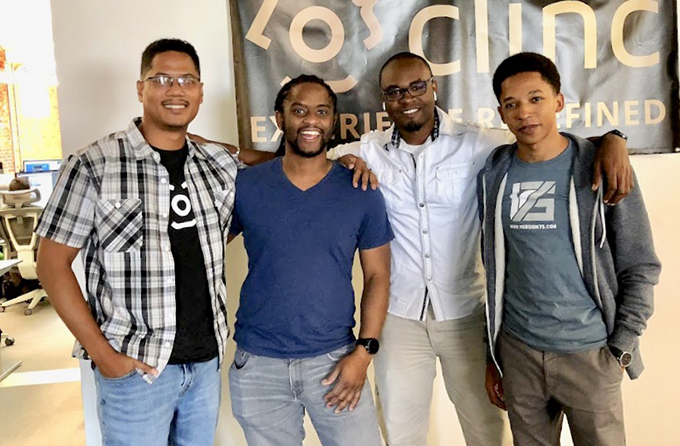 Social-impact led Software Company Version 75 (V75) Solutions recently launched the NeXus Hub Initiative, a project which aims to foster an environment of collaboration and innovation among local techpreneurs to bring the industry to a state where it can significantly contribute to job creation.

“All we need is the right environment to shape the industry and create home grown success stories,” social entrepreneur Eldon Marks, who is also the Chief Executive Officer (CEO) and Co-Founder of V75 Solutions, said.

The Nexus Hub Initiative, Guyana’s technology and innovation centre for tech industry growth and development, includes an online platform for networking, a physical space for developers to interact, and “tech movements.” The latter includes paid apprenticeships, mentoring and funding opportunities, a social networking platform, and a hack-solve event.

The launch, which was hosted at the Herdmanston Lodge on June 29th, saw the attendance of many persons from within the local tech community, who came out to satisfy their curiosity about a project, which has been months in the making. The initiative is a spin-off from another V75 project, “devX,” which was hosted last year as an avenue to network developers and showcase their work.

“It was a Friday in 2015 when we came up with what would become “devX,” an event designed to network developers and showcase their work with a deeper purpose of having us and others witness the potential that we knew we had. We got together with wonderful sponsors and supporters, our collaborators, our network of volunteers and we took action and we made devX 2017 happen,” Marks told the audience.

“It was Guyana’s first online, offline digital industry exhibition and it surpassed all of our expectations. We managed to hold weekly showcases all throughout the month of August; we held a series of informative talks, side events… like a tech fete and a gaming tournament and we even built an online platform that indexed over 70 local developers/developer entities and they uploaded over 200 of their works as exhibits,” he further reflected.

Sunday Stabroek understands that it was through devX that the company was able to collect “valuable data” which offered insights into the local tech industry.

“The insights that we saw were a bit troubling, which spelt a relatively dim future for the local tech industry. We saw that less [than] 12% of exhibitors were team-based. This told us that there were rare cases of collaboration among developers. We also saw that service-oriented works, such as client websites and web apps were predominated and innovation centric works, such as research, robotics, and animation, were in the minority just by 11% of those represented as exhibits. So, there was low evidence of innovation. We also saw that even though the service-oriented works were predominated, less than 10% of those were from clients abroad,” Marks shared.

He further noted that if left unaddressed, these statistics meant that Guyana’s tech industry was not in a state to reliably contribute to job creation for economic growth.

“But, we have one thing that works for us and that is our world-class potential as developers and I am not saying this because I am an idealist; I have experienced it in the 13 years I spent in the CS Department at UG working alongside brilliant minds in the form of students and colleagues… It’s time we recognize this because others are recognizing this,” Marks said, before playing a video message from Jason Mars, Co-founder and CEO of Clinc, a company that is said to have created the world’s most sophisticated and comprehensive conversational Artificial Intelligence (A.I) platform for enterprises.

In the video message, Mars, as he has done in the past, expressed his interest in the local tech industry and suggested that all that is needed is an environment where local talent can manifest itself in ways that bring benefits to the world.

“All this told us that we needed to take an initiative that we started and respond to its higher calling. DevX was taken and evolved into what we would hope is that right environment,” he said.

Marks, in his presentation, explained that the Nexus Hub Initiative, which was established in partnership with Clinc and in collaboration with the University of Guyana, is based on three main objectives. These are: to foster collaboration through a physical space, online platform and programmes; to drive innovation with collaborative environments, tools, funding and mentorship; and to create opportunities through capacity building, networking and support platforms.

The initiative, he said, comes in three forms: a physical space for developers to socialize, work and innovate together; an online platform to index and connect developers with opportunities; and lastly, tech movements, which have their objectives translated into action.

“These are not finite tech movements; the idea is to expand on the platform of tech movements as need arises so we got to work with everyone in their room and other entities to build on these tech movements so we can respond to the needs in our society as time goes by,” Marks added.

Among the six movements presented to the audience at the launch are an annual NeXus Connect Event, which is scheduled for August 4th, 2018 and is aimed at connecting developers, investors, business owners and mentors; paid apprenticeships and the NeXus Accelerator Programme.

Regarding the inclusion of paid apprenticeship programmes, Marks said, “We have experienced a lot of raw talent locally and they usually have to choose between getting a job that does not tap into their natural potential to just make ends meet; they have to choose between that and learning the field that they love. With paid apprenticeships, we are hoping to give individuals with that raw talent to learn full time and be support[ed] financially.”

Sunday Stabroek understands that each apprenticeship is based on actual industry needs so trained apprentices have a job waiting for them when they graduate.

Marks had also extended an invitation to other tech companies to join forces so that more persons can be trained. He noted that one of their first paid apprenticeships will be with Clinc, where they will learn how to do competency engineering for their conversational AI.

Similarly, the NeXus Accelerator Programme is designed to allow tech innovators to receive the funding and mentorship needed to take their products to the market.

According to Marks, having funding and mentorship in innovations is absolutely crucial for boosting and stimulating innovations.

We want to be able to tap into connections and resources to bring those opportunities through the hub to you, so we are collaborating with the Department of Computer Science to create a commercialization pipeline for undergraduate research projects with the potential to become actual products. We are also collaborating with the Guyana Economic Development Trust to connect local tech innovators with the Guyana Innovation Prize to get funding and mentorship for their innovations,” he added.

Another feature of the Tech Movement includes the NeXus Link Social Network, which will virtually index and connect developers with opportunities. This newspaper understands that the purpose of this platform is to build connections virtually; connections which, according to Marks, will transcend borders.

There is also the NeXus Developer stories, which will allow developers to share their stories and their successes. The NeXus Developer stories will take the form of a series of video interviews and mini documentaries showcasing local developers, their endeavors and experiences as practicing technologists in Guyana. These stories are available on their YouTube channel nexus hub Inc. on YouTube.

Finally, there is the annual NeXus Hack-Solve event, aimed at solving social problems through tech. With regard to that event, Marks said, “Think of a hackathon event where teams instead of competing, they collaborate to solve common problems with the application of technology.”

He noted that the event is scheduled to be held for two days in the middle of August, and is expected to produce a “nationally relevant prototyped solution” at the end of it. This specific event Marks said, creates an opportunity to kinaesthetically experience collaboration in spite of labels or affiliations.