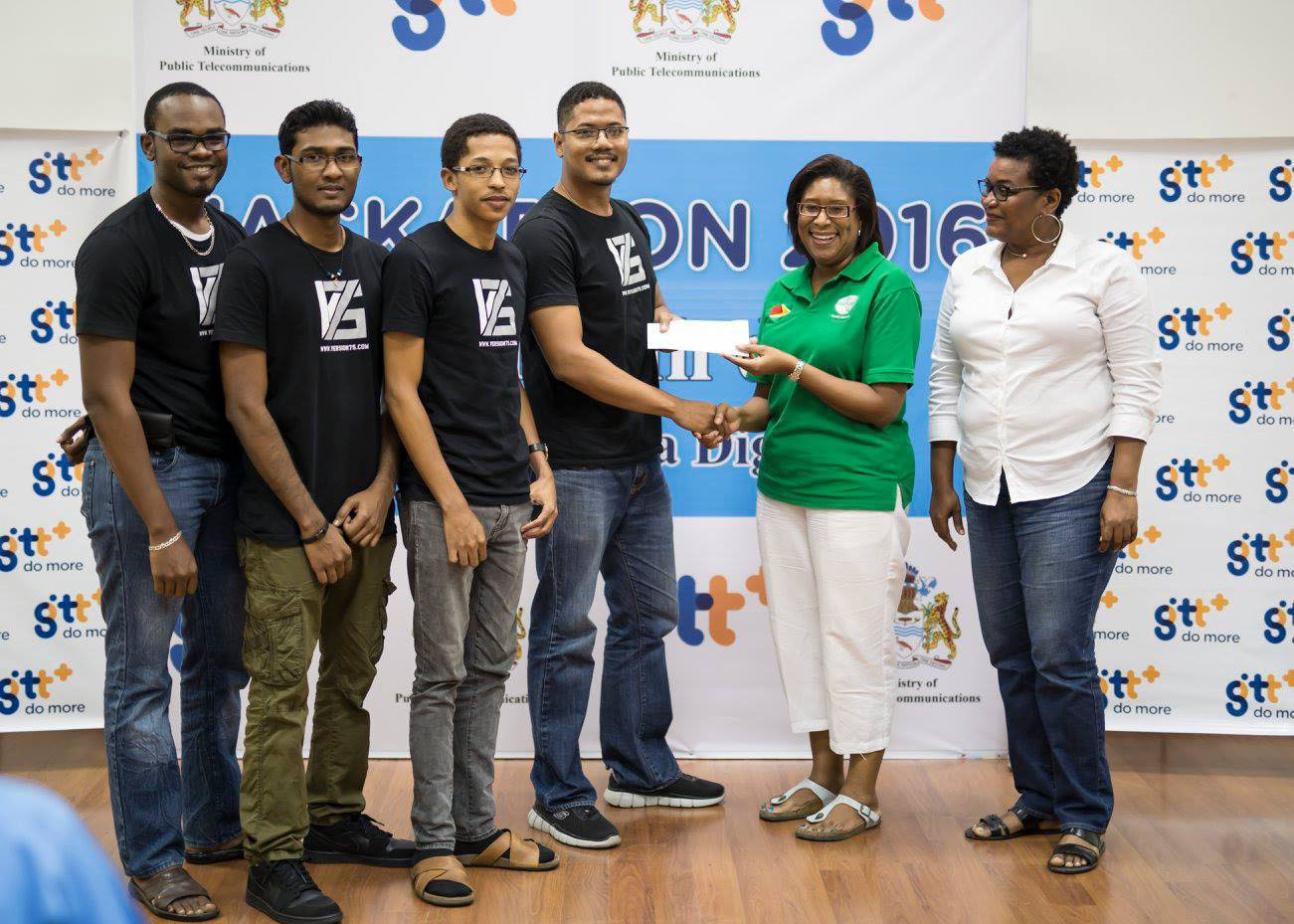 Having endured 48-hours of intense coding, Version75 Solutions on Sunday emerged as the winners of the first ‘Hackathon,’ which was organised by the Ministry of Public Telecommunications at the Arthur Chung Conference Centre last weekend.

Also known as a Hack Fest, or a Code Fest, hackathons are marathons for Information and Communications Technology (ICT) developers to showcase the creative side of ICT development, encouraging both novices and experts to work together to create software applications that provide solutions to real life challenges.

Held under the theme “code till yuh drop,” the event saw the participation of eight teams, one of which came from Suriname to vie for the first prize of $300,000 and bragging rights.

The winning team, Version 75 Solutions, also known as V75, was successfully able to develop a product in response to the challenge of creating an application that could facilitate the reporting of incidents to the appropriate agency.

As a requirement for the development of the app, it was expected that the team’s product must allow persons to give the specifics of the incident they are reporting such as time, location, nature of incident; and must allow for anonymous reporting; must be able to handle all types of incidents of national interests such as homicide, accidents, fires, power outages etc.

Formed on January 2, 2014, V75, is a software community disguised as a company that opts to prioritize collaboration over competition and is big on social impact through innovation.

“When we are not working on great solutions for our clients, we devote our time to pro-bono development, digital entrepreneurship support activities and offering free programming courses through our V75 Young Developers Group and weOwn space http://www.weown.space,” explained Eldon Marks, V75 team leader and Chief Executive Officer.

In a recent interview, Marks lauded the Ministry of Public Telecommunications for the Hackathon, which he said was long overdue in Guyana.

He stated that not only did the competition present ICT enthusiasts with an opportunity to exhibit their talents in this particular area, but it also exceeded his team’s expectations, leaving them with an experience that was nothing short of priceless.

In a recent interview, Marks lauded the Ministry of Public Telecommunications for the Hackathon, which he said was long overdue in Guyana.

He stated that not only did the competition present ICT enthusiasts with an opportunity to exhibit their talents in this particular area, but it also exceeded his team’s expectations, leaving them with an experience that was nothing short of priceless.

“Guyana has many groups of techpreneurs/ freelancers who had no real public outlet to exhibit their skillset and receive recognition and encouragement, prior to the hackathon. It is important to celebrate local talent in this industry, in particular, since IT has been identified as a major driver for economic development in our third-world country,” he shared.

“The team and I enjoyed every moment. Strangely, there was never any sense of tension or anxiety although it was a competition. This, I believe, was as a result of a great team dynamic and humility of my teammates – just having the opportunity to work together to build a nationally relevant product with no expectations made the experience a fun and enjoyable one,” Marks added.

While V75 has a network comprising 30 individuals, there are five core members, four of whom took part in the Hackathon; these were: Ashim Badrie, Shemar Lindie, Asa Brouet and the CEO himself.

Marks was quick to note that all five core members of V75 are proud to say they are products of the Department of Computer Science of the University of Guyana.

Commenting on the challenges the team would have faced during the competition, Marks said the biggest challenge for the team was finding a comfortable place to take a nap during the 48-hour period.

But apart from that, he said the team operated well together as each member knew what needed to be done and excellent group dynamics helped them to quickly resolve issues as they arose.

At the end of the 48 hours, Marks stated that the team members had the utmost confidence in their app, dubbed Tell, copping the coveted first place position.

“We have great confidence in our process and standard and we share this confidence in the quality of our work as well. The app was built on a solid foundation with a sound design. With a bit more refinement, we believe this should be ready for beta testing and later, public use very soon,” he shared.

Asked if he believes Guyana has a future in software development, Marks said, “Emphatically, yes! The hackathon is the most recent event which proves this. Our gifted community members also confirm this potential by delivering quality software solutions to many clients both home and abroad. In addition, based on the observed demand, more local enterprises are becoming more aware of the necessity of ICTs to optimize business operations. From simple websites to custom information systems.”

Moreover, he believes that with the right environment, this specific kind of entrepreneurship can be developed into a thriving industry in Guyana.

“We will first need more deliberate environments, which are able to give the naturally gifted human capital in Guyana an opportunity to discover and develop their true potential. Such environments are not unlike the one created for our 48hr hackathon which gave various professionals a place to gather, collaborate, network and produce,” he said.

“V75 has been fortunate to find a relatively new ‘environment,’ which seeks to offer great promise for Guyana’s entrepreneurs in the same vein. This environment is weOwn space, a shared office space located in South Ruimveldt Gardens. Quite a few techpreneurs are members of weOwn space,” Marks added.

Additionally, the team leader noted that there should be more emphasis on the ICT based programmes in the school system to foster the development of those who are interested in following ICT as a career.

“The Department of Computer Science has recently revamped their academic programmes, now offering degrees in IT, Information Systems and Computer Science. However, we believe that we shouldn’t wait until the tertiary level to begin the journey of software development. This should be done at an early age, at the beginning of the secondary level because there are a lot of young brilliant minds out there who would find it very fun and interesting to create an application,” Marks shared.

During a press conference held a few days prior to the event, Minister of Public Telecommunications, Cathy Hughes indicated her interest in hosting similar competitions in 2017.

Marks noted that while the first hackathon was generally well planned out and executed, he recommended that the participants be given more scope for innovations in future competitions.

“At the hackathon, we witnessed many innovative solutions being presented in concept but not in operation. In hackathons, the focus is on delivering the most complete working product in the time allotted, leaving little room for creative thinking. We made the strategic decision to focus on delivering on functionality, however, if we were provided with a designated period for delivering on the concept, this would allow developers the room for more creative thinking,” Marks said.

“Possibly, in future events, by holding an “Ideathon” that focuses on the formulation of conceptual solutions before the hackathon, the scope for innovation in these events could be much improved. The outputs of the “ideathon” competition can then be fed into the hackathon competition,” he added.